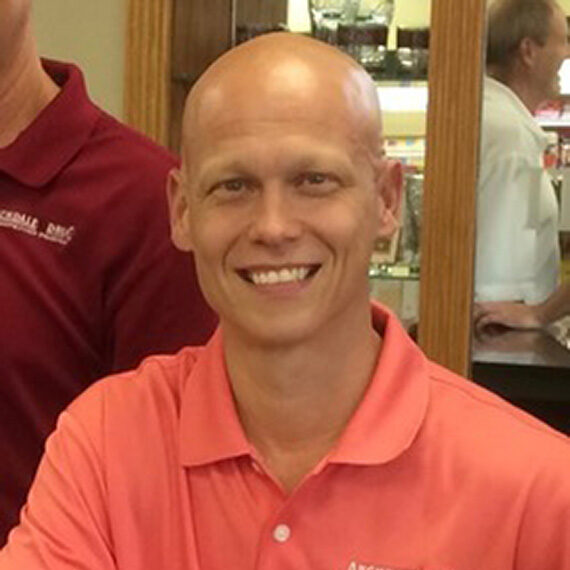 Decades of Experience in the Pharmacy Industry
Ryan Hoskins started as a staff pharmacist at an independent pharmacy in North Carolina who was a Mutual Drug member nearly 26 years ago. After the primary owner sold the pharmacy, Ryan decided to open his own pharmacy down the road, just five years later, known as Archdale Drug.

While Ryan’s pharmacy “home” changed, one thing that didn’t was his loyalty and feelings towards Mutual Drug. Considering his past experiences, he knew he wanted to maintain his member status as he began his new journey. As time passed, Ryan was fortunate to open a second pharmacy location, also as a co-op member.

What kept him coming back?
The same things that kept Ryan satisfied with Mutual Drug are the same things many other members value - superior customer service, the rebate program, and the intangibles provided to member pharmacies. Ryan shared that he feels there is a family atmosphere when it comes to being a member, and it feels like an extension of his own company.

Similarly, Mutual Drug offers small perks that might be hard to come by with other companies. For example, when sending over refrigerated goods, Mutual Drug always sends back the bags and coolers that are used, a feature that stuck out to Ryan. Additionally, the use of paper receipts is a thing of the past, which he acknowledged as a major cost-saving tactic. Considering the overall picture, Ryan says that he knows the company is a wholesaler, but his outlook is different - it becomes so much more than just purchasing drugs for the best price. At what point are these invaluable intangibles worth another 1% in savings somewhere else?

What’s next for Ryan and his pharmacy?
After over 25 years in the pharmacy space and two of his own locations, Ryan hopes to pass down his stores to his children - two of whom are currently enrolled in pharmacy school. After discussing the details of the business with them and the benefits of being a member, he is confident that his children will continue to choose Mutual Drug in the years to come. 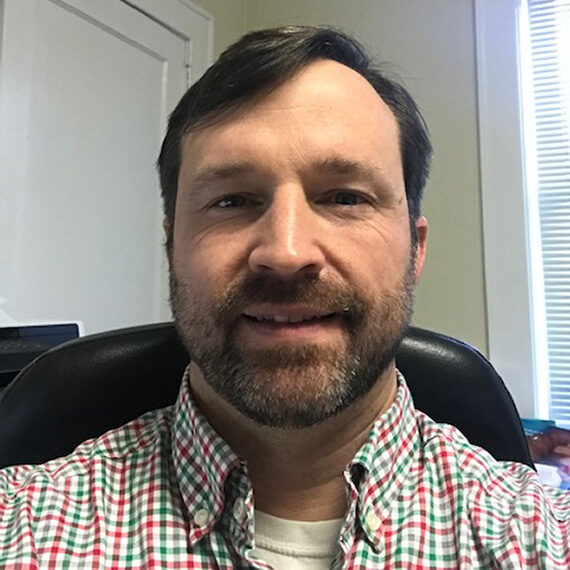 After starting with Mutual Drug nearly a decade ago, Brent Talley took ownership of Hayes Barton Pharmacy three years ago. While he did make some changes around the pharmacy, Brent knew that Mutual Drug would continue to be their wholesaler. See what stood out for him as a pharmacist and then owner of an independent pharmacy.

Accountability & Service
As an independent community pharmacist, Brent takes immense pride in providing personal care to his community. In return, he values a high level of accountability in his business as well. After joining Hayes Barton Pharmacy 10 years ago, he took ownership of the pharmacy three years ago.

Through taking on more ownership, Brent knew he wanted a partner he could count on – not just someone who could save him a few pennies every month. He knew the service and relationship he had with Mutual Drug as a staff pharmacist, and decided that they were the right wholesaler to continue to support Hayes Barton Pharmacy moving forward.

Like any savvy business owner, Brent did do a bake-off between Mutual Drug and other wholesalers. While in some areas, he could have saved a very small margin, the value of personal knowledge, trust, and accountability are more valuable for him and his business. More than just rebates, the co-op offers a complete suite of personalized services that support his business. This gives Brent people he can trust, where he knows he can reach them on short notice when he has questions – and that was not something other wholesalers could commit to.

Leaning on the Co-op
Beyond the personal service he receives from Mutual Drug, Brent also values being part of a co-op where members support each other. For example, recently he was struggling to get flu shots in stock. Brent reached out to his account manager, who called all her other stores to see if there were any additional flu shots to spare. This level of service and connection is something that is unique to the co-op – and has been an asset to Hayes Barton Pharmacy.

While Hayes Barton has been around for nearly a century, Brent is still new as a pharmacy owner – which gives him the ability to make his own path. With the future direction of pharmacy, the service Mutual Drug provides and connection to other co-op members cannot be beat. 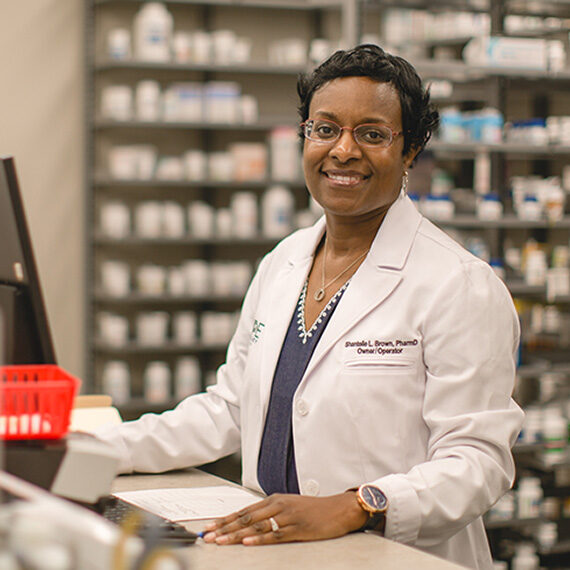 Shantelle opened her pharmacy last year, and had to face the challenges of COVID-19 less than a year into business. Fortunately, she felt secure in her business thanks to the early support and solid base she had built during her first year open. Mutual Drug was an essential partner in opening Hope Pharmacy – read on to learn why.

Starting Small
The first year of business is the hardest across any industry – throw in a pandemic, and for many you have a recipe for disaster. But this was not the case for Shantelle Brown, who opened Hope Pharmacy in Richmond, VA in April of 2019. Located inside of a local grocery store, Hope Pharmacy serves a low to middle income population. As the area is beginning to attract a younger population, Shantelle’s pharmacy is focused on bridging the gap between the old and the new within her community.

Metrics & Medications – supporting both financial & experiential excellence
Before Shantelle opened her own pharmacy, she worked at Sam’s Club. This made her realize that while the numbers and metrics were important, it was ultimately the patients that count. This metrics mindset is part of why her business has flourished this year, but her own personal commitment to her patients is what keeps them coming back.

She turned to Mutual Drug because she knew they have a reputation for a more personalized approach, which was something she was looking for to support her business. Additionally, she was able to work through them to secure a loan that allowed her to open her business – which is rare among other wholesalers. The co-op clearly communicates with her about any drug stocking issues or changes. Additionally, because it is a smaller wholesaler, Mutual Drug can offer some drugs more readily because they aren’t moving such a large quantity at once.

Keeping Up Hope
Ultimately, Shantelle appreciates the transparency and support that Mutual Drug offers for her business. Rather than being routed through a large wholesaler, she knows exactly who backs her pharmacy and can answer her questions at Mutual. This gives her hope in their continued partnership, and the overall performance of the co-op to support her business in today’s changing environment. 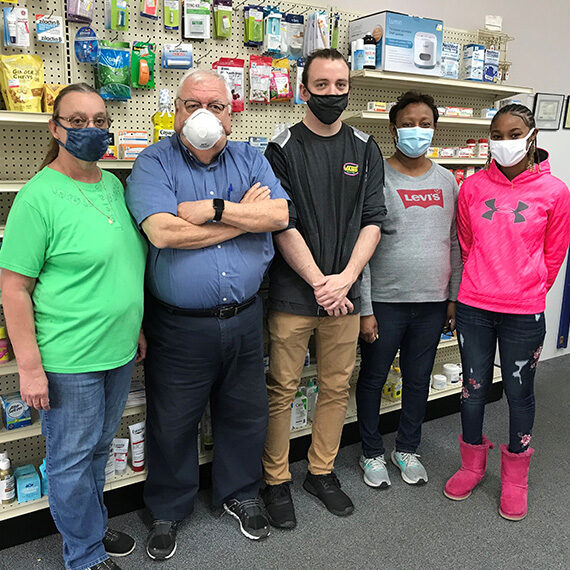 Legacy member Nick Gross talks about his long history with Mutual Drug and discusses how the “little things” that keep him coming back aren’t really so “little” to an independent business owner.

Family Ties
Nick Gross, owner of Medi-Save Pharmacy in Camden, South Carolina, has spent 19 years at the same location serving his customers and filling an average of one thousand prescriptions per week. Nearly 70 years ago, Nick’s father joined Mutual Drug as one of the first members shortly after the co-op formed, so it is safe to say that he has been around from the very beginning. Watching his father’s experiences allowed Nick to remain sure of his decision to become a next-generation Mutual Drug member when he had choices upon opening his own pharmacy.

The Not-So-Little Things
Nick recalls some major differences in the drug wholesale industry back in the day, specifically rebate programs - or lack of. With less competition, you just accepted what you were offered, and that was that. But now, as the industry has populated with more competition, Nick acknowledges benefits he found with Mutual Drug that he couldn’t elsewhere.

For example, he compared the Mutual Drug return policy to other wholesaler policies, as he knows that can be a major profit center, and found that with the co-op, you can send the product back for the full price - no restocking fees, either. When it comes to being a small independent business, extra charges to restock products you won’t be using truly add up. While it might seem like a small perk, it’s defining to pharmacies like Medi-Save.

Continuing to Move Forward
While COVID-19 has taken a toll on all businesses in some way, Nick Gross and Medi-Save Pharmacy have no plans on going anywhere. Their team will continue to safely serve their patients and help keep the community of Camden healthy all year round.